Integration of high-quality components on a new press is essential.  If you buy a new Cadillac, you wouldn’t put retread tires on it, as the saying goes. The press is the same way:

High-quality anilox rolls, inks, plates, blades and end seals, yes, end seals, can keep customers happy.
​
End seals are taken for granted, yet they can be the determining factor in a printer’s failure to keep customers, simply because he can’t get the press to run efficiently. Most printers don’t know enough about the end seal to identify it as the culprit. Our increasing knowledge of how end seals interact with the heart of the press has led to the conclusion that having the proper end seal within an enclosed-chamber doctor blade system is critical.

While many OEMs sell a press to a customer at a very high markup, they will put the cheapest anilox rolls on the press (unless otherwise specified by the customer) in order to reduce their cost. This applies to enclosed chamber systems, as well. The customer pays a huge price for the enclosed-chamber system and has an end seal that only costs him 35 cents to replace. From the start, he experiences end-seal leaking, excessive blade wear, premature anilox roll wear, score lines and many other adverse effects.

Today, we have reached the point where we can actually modify an end seal and fix most related problems.  As a result, successful printers are, for the first time, experiencing perfect metering on press. This adds up to extended blade life, substantially reduced ink waste, less frequent end-seal replacement and elimination of score lines on the anilox roll. In certain situations, fixing end-seal problems can actually increase the quality of the print because a good seal allows for stabilized doctor blade seating and smoother transfer of ink from the anilox roll to the plate.
Blue-foam and white-foam seals are the most common.  These seals are the least expensive but usually cause the most problems.  You should never be able to take a seal, put it in your hand and squeeze it to the extent that your fingers almost meet. Can you imagine the instability created on the chamber from such a flexible seal?

Also common is the seal made of a flexible porous base with a 1/4-inch strip of felt adhered to the radius.  Sometimes a small hole has been drilled in the middle of the bottom to accommodate the chamber’s water supply line or solvent supply line (depending on the type of ink used). This line forces liquid into the hole and keeps the felt strip saturated for lubrication.  Because most of these supply lines leak and create a mess, printers will, in some cases, cut off the supply line and simply apply grease or Vaseline to the radius to keep it lubricated.
​
The rubber seal, made of a material similar to that of a tire, is also common. This seal does not seat well because of the co- efficient of friction created by the rubber and the anilox. In some cases, the radius of the seal contains a bevel that acts as a flapper. This flapper is recessed on the inside of the chamber.  Ink is supposed to pressurize the bladder, forcing the radius of the seal up to form its own sealing capabilities. Instead, excessive leakage results. 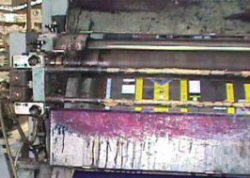 Inadequate end seals create a mess and cause problems on press.

​Ink waste, downtime and damaged anilox rolls can cost printers hundreds of thousands of dollars annually.
The radius of seals made of rubber, neoprene, foam or cork material must always be lubricated before installation. If the seals are not lubricated, they will burn up or dry out from the ink. The coefficient of friction created by the rotating anilox roll also creates many problems.  The best lubrication for these materials is Vaseline. If Vaseline is not available, then bearing grease will suffice.

Sometimes an end seal problem is not caused by the material used, but by its design or position.  Correction may involve simply raising the end seal 1/16-in. or lowering it.  Alternatively, it may require modifying the radius and changing the seal bevels so that the doctor blades change their angles of contact to the anilox roll.

Felt Is Most Effective
Through much research and development, Harper Corp. has determined that felt is a very good sealing material to use in the press. There are 25 different grades of felt, ranked according to the percentage of wool in their makeup. Felt that is 100-percent wool is the top grade; however, felt with 80-percent wool may work better in the chamber, depending on such variables as:
​ These are very important variables in determining the best seal for the press.

It is of the utmost importance that all felt material be presoaked before installing it in the chamber. When the felt is not presoaked, it will abrade within minutes and create sealing failure. Most manufacturers of high-quality enclosed-chamber end seals presoak felt seals prior to shipping, eliminating any problems for their customer.  Felt seals should be presoaked in oil, generally for at least 15 minutes, then drained and left out to saturate for a period of 24 hours. After the felt seals have been soaked and saturated for 24 hours, all unused seals should be kept in a sealed (air-tight) container or bag until ready for installation. This will ensure that the seals maintain their sealing integrity.

Anilox Roll Influence
One of the most important factors in an end seal’s quality of performance has nothing to do with its material.  Believe it or not, the anilox roll can determine whether a seal works or fails. Ink is forced out of the microscopic anilox cells and is metered by the doctor blade. Cells in a ceramic anilox roll should never be engraved on the end of the roll where an end seal is riding.  This causes the ink to be forced up onto the end seal and slung onto the press frame, where it creates bad conditions on the press.
​
An engraved anilox roll should feature a non-engraved area that is approximately the width of the end seal. If the end seal is “x” inches thick, then the non-engraved area, sometimes referred to as the “dead band”, should also be “x” inches.  The porosity in the ceramic will allow enough ink to be released, and the pre-lubricated radius of the end seal will provide adequate sealing and material durability.

​
This anilox roll is being engraved approximately 1/2-in. from the end of the anilox roll. It was determined that this enclosed chamber system had an end seal that was 1/2-in. thick. This is important for the seal to optimize its sealing properties.


When an end seal leaks, the first thing a press operator thinks of doing is to move the chamber in. This is exactly the opposite of what should be done, as it will cause anilox roll scoring, premature wear and excessive doctor blade wear.  An anilox roll can be destroyed this way in a matter of minutes.
​
Another problem that can cause premature wear of the end seals and potential damage to anilox rolls is chipped roll ends. Taking aniloxes in and out of the press sometimes creates “dings” on the ends of the rolls, which leads to chipping of the ceramic. The end seal will not seat right where the chipped ends are, and ink will sling onto the press frames and journals of the rolls, creating a mess. The end seals will also wear out more quickly as a result.  In addition, because chips on aniloxes tend to become larger and spread, those ceramic pieces will enter the inking system and cause blockage behind the doctor blade. The end result can be anilox roll scoring. 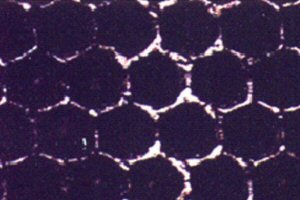 Shown is a scored anilox roll caused by ceramic chips and excessive leaking of the end seal. It is important to repair chipped ends of the anilox roll with an epoxy-type repair kit. Once an anilox roll is scored, the score line will always be there and will usually show up in the printed job.

​To summarize, there is a lot of information to be shared about end seals. It is important to contact your original equipment manufacturer or your end-seal supplier for expert advice on end- seal material and related components. Remember, it’s your money that you are spending wisely or wasting!

​Questions about this article?  Contact HarperScientific:
HarperScientific.com, a Division of Harper Corporation of America
E-Mail:  techservices@harperimage.com